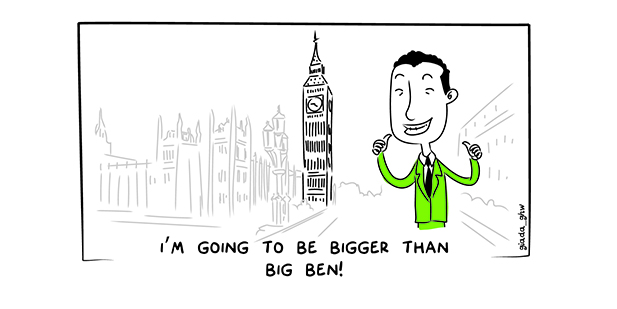 The following statistics, drawn from an excellent article by our friends at ukvisa.blog, show the attrition rate at the first stage of the process, the application for entry clearance. 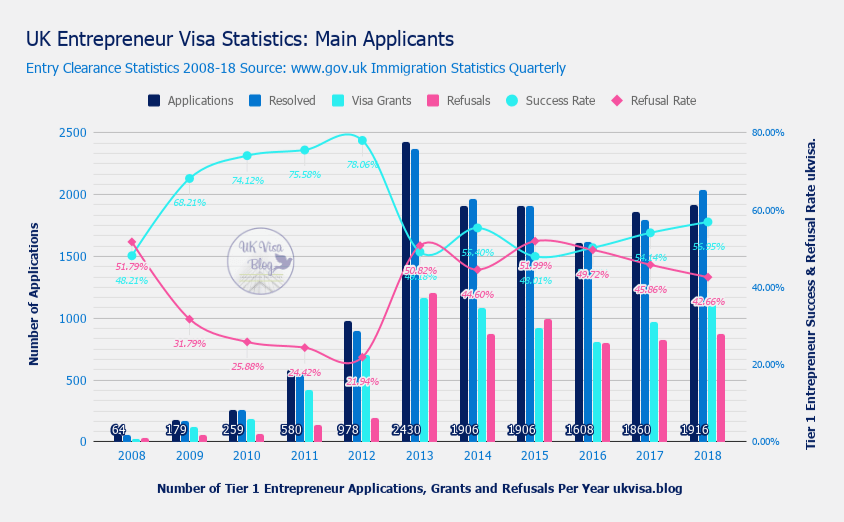 Although the "genuine entrepreneur" test was introduced with good intentions (i.e. to reduce the number of fraudulent visa applications), one of the major criticisms of this "genuine entrepreneur" test was the way in which the test was administered. Entry Clearance Officers (ECO's) were given the responsibility to assess "the viability and credibility of (the applicants) business plan and market research of (their) chosen business sector".  The subjective nature of this assessment caused widespread concern, especially given that the immigration officers responsible for these decisions would almost invariably not be properly qualified to make an accurate assessment of the credibility of the applicant's proposed business and the viability of their specific plans.  To overcome these difficulties, ECO's were increasingly forced to rely on scripts when interviewing applicants to apply the genuine entrepreneur test.  This workaround didn't really work either, ultimately coming under court scrutiny for being too rigid and arbitrary.

In 2015, the Migration Advisory Committee (MAC) carried out a review of the Tier 1 Entrepreneur visa, concluding, among other things, that the decision-making process for the visa was in need of reform.  MAC's 2015 report called for reform of the current entrepreneur visa application process by exploring "alternative delivery options for the genuine entrepreneur test."  This recommendation would ultimately lead to the development of the new start-up and innovator visa routes, in which applicants business ideas would be assessed by a Home Office approved Start-Up and Innovator Visa endorsing bodies.

It makes perfect sense to have business ideas be assessed by endorsing bodies with entrepreneurial experience, commercial insight, and technical knowledge rather than by Entry Clearance Officers who are ill-prepared to make a sound judgment about the viability or otherwise of a particular enterprise.  However, these changes, along with several other small but significant changes to the rules as they existed under the old Tier 1 (Entrepreneur) visa scheme, throw up a series of problems for entrepreneurs looking to make the move into the UK market which may make it even harder to secure the new Innovator Visa than it was to secure the notoriously difficult Tier 1 (Entrepreneur) visa.

There are numerous reasons why the new visa looks likely to be even harder to secure than was the previous visa.  We've listed ten things below for you consider when you are considering which visa route is likely to be best suited to your unique situation and goals.

As we have hopefully made clear, there are numerous challenges connected with the new innovator visa and we suspect it will be some time before this visa route is perceived as an attractive option for the high caliber foreign entrepreneurs that are looking for a home for their innovative, viable and scalable business ideas.  Our opinion is that the Tier 1 (Entrepreneur) visa route should not have been closed until the Innovator visa route was actually ready to receive applications.  We'll have to wait and see what the initial take up of the innovator visa looks like, but I suspect that the number of applications will be substantially lower than for the visa it replaced due to the problems detailed above.

EDIT (22nd August 2019) - The Entry Clearance tables show that for those applying from outside of the UK, there have been just four applications made in the first quarter of 2019 (April - June) of which two have been granted and two are yet to be determined.  By way of comparison, there were 738 Tier 1 (Entrepreneur) applications made in the previous quarter.  Whilst it was evident to any sentient observer that there would be a significant fall in the number of applications for the new innovator visa, I think these statistics were surprising to everyone, including the Home Office, and they will be now be looking at ways to encourage participation in the scheme.  Our opinion, for what it is worth, is that the most important way to promote this scheme would be to increase the number of endorsing bodies that are committed to working with Innovator visa applicants so that there are endorsing bodies from every major industry that are willing and able to support foreign entrepreneurs with innovative business ideas.

If you are currently considering the Innovator visa route, we will be happy to help you navigate the brave new world of UK business immigration.

Please reach out today for a free, no-obligation initial consultation.